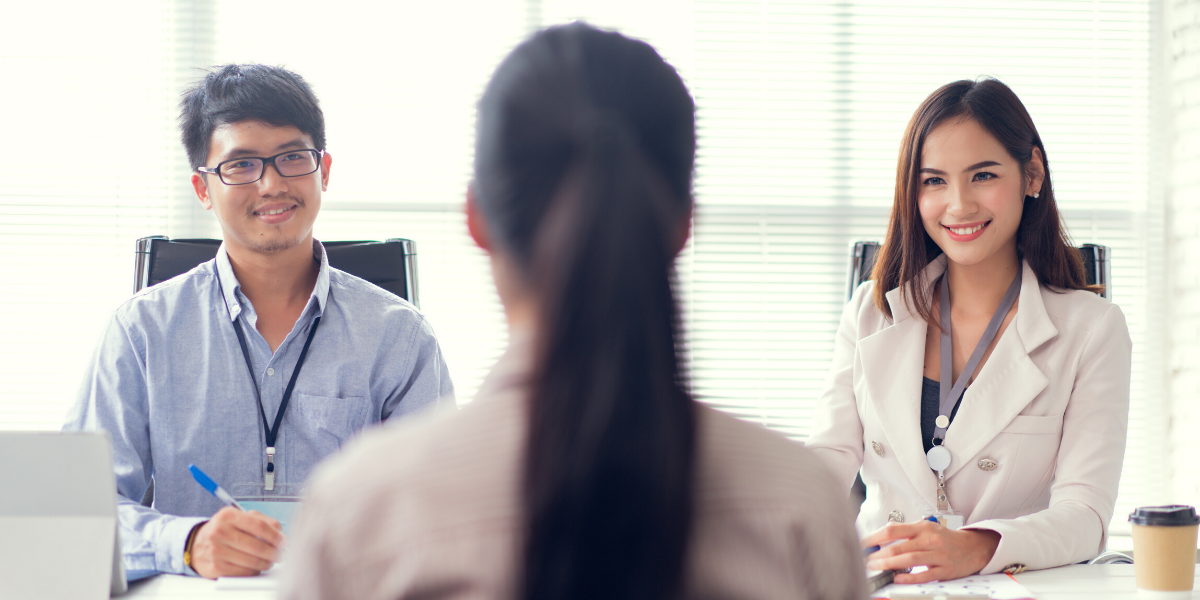 This article was originally published on CareerWise – “Your source for career development news and views.”

What do you do to calm down before a job interview? Some candidates call their loved ones for emotional support, others rehearse practiced answers, some fidget – the list goes on. Feeling anxious about job interviews is normal but can be very uncomfortable and unwanted. Consequently, there are many ways that individuals attempt to settle their nerves.

A few years ago, two Canadian psychology researchers from the University of Guelph were interested in how to manage interview worries. The researchers, Amanda Feiler and Deborah Powell, adapted two short interventions commonly used to reduce social anxiety and tested them with a sample of 104 interviewees in Southern Ontario. Study participants were diverse in terms of ethnicity and age, and there was an even split of both unemployed and employed individuals. As the researchers found that both short strategies helped reduce interview anxiety for most individuals in the study, they may also be effective for your clients.

The link between social anxiety and interview anxiety

Those who get anxious around others are vigilant about the way they present themselves; they can overthink the way they look or the way their actions are being perceived by others. Additionally, those who experience worries in social situations can be afraid of receiving negative judgment and criticism. Since the job interview is an important event where job seekers will be evaluated by others, interviews can be particularly fear-provoking.

Strategy 1: A shift in focus

Those who worry about interacting with others tend to focus their attention on themselves, rather than the situation around them. Interestingly, socially anxious individuals tend to see themselves through a third-person perspective, rather than through their own eyes. They can feel as though how they think they look is the way they actually look to others. For example, if an anxious job applicant feels unprepared, they may believe the interviewer will absolutely notice their lack of preparation. These worries about how others see them contribute to increased anxiety in the interview.

Worried interviewees can spend an excessive amount of mental effort worrying about the impression they are making. The result? Nervous interviewees could potentially be distracted by imagining what the interviewer is thinking about them, rather than how to answer interview questions effectively.

To shift their attention away from themselves, interviewees can try this short exercise:

An important ingredient for interview success is believing in one’s abilities. Another thought pattern that some anxious interviewees engage in is having a negative belief of how the interview is going or will go. Nervous interviewees may overestimate their likelihood of “failure” in an interview, perhaps saying to themselves: “I wish I had more interview experience” or “This interview is not going well.” Alternatively, worried interviewees may picture themselves in scenarios where they are failing an interview. So, a strategy to change this pattern of thought is to imagine themselves doing the opposite: performing well. By picturing success, job seekers can counter negative images of failure. Here’s a strategy you can share with your clients:

We have all had moments in life where we felt confident, successful and relaxed. Next time you are in an interview waiting room, try to close your eyes and remember a vivid memory where you experienced these positive feelings. You may want to think about what the situation was, who you were with, what you felt and what the good aspects of the situation were. Try to keep this memory vivid in your mind for as long as you can. You can aim to hold this memory for 15 to 30 seconds. In the interview itself, when you are starting to doubt your abilities, try to recall the memory where you felt successful. If more negative images of yourself start to push into your mind, try to push them back out and reflect again on your past success.

Feeling nervous about interviews is normal, but interviewees don’t need to suffer through it. Psychology research has shown two ways to help counter those interview-day worries. Best of all, both strategies can be used in the waiting room a few minutes before the interview and during the interview itself. First, interviewees can focus their attention on what is happening around them, rather than on how they are performing. Second, candidates can visualize their success in an interview, rather than imagining failure. With these two simple mental tools in hand, your clients can hopefully gain short-term relief from interview anxiety.

Irene Zhang (she/her) is a Master’s student in Industrial-Organizational Psychology at the University of Guelph and a Consultant for Organization & Management Solutions. Zhang has research interests broadly in recruitment and selection, with a focus on personality and interviews. You can find her on Twitter and LinkedIn, and the Guelph Selection Lab on Twitter.

© 2020 CharityVillage v.3.3.14-1083-gb8bfc80
We use cookies to ensure that we give you the best experience on our website. If you continue to use this site we will assume that you are happy with it.Ok